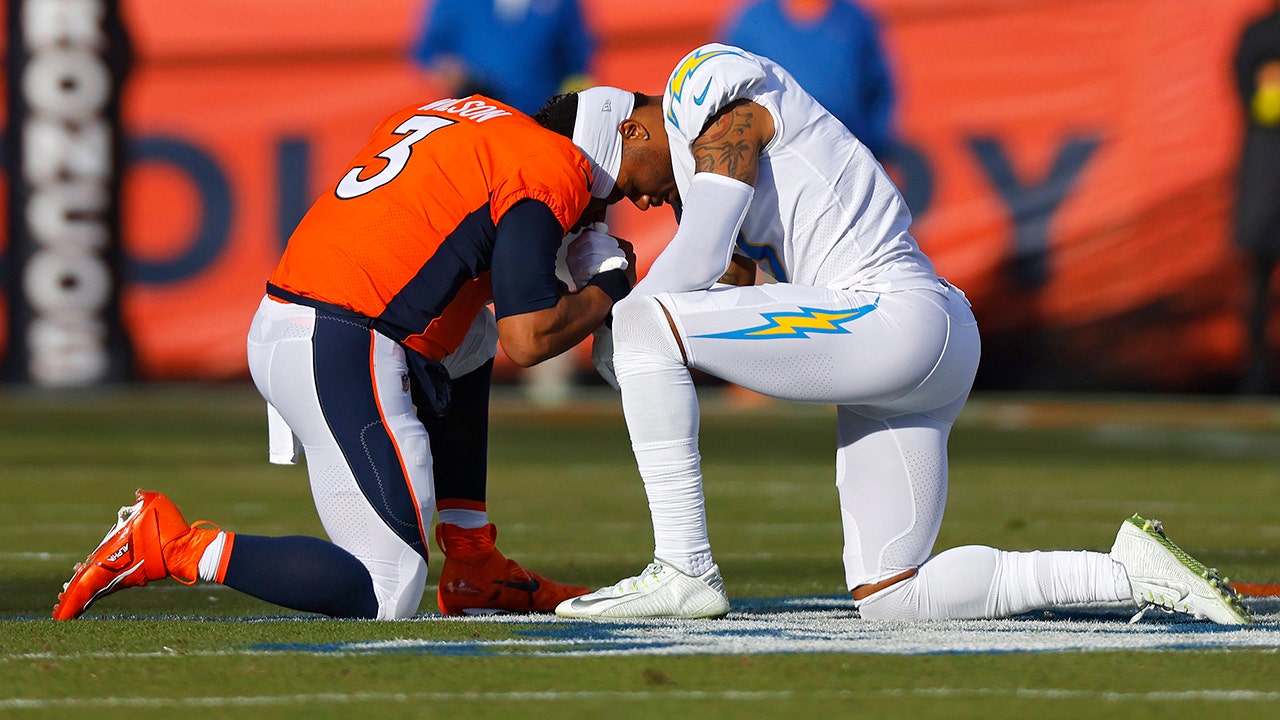 Denver Broncos quarterback Russell Wilson and Los Angeles Chargers safety Derwin James met for a moment Sunday to kneel in prayer at midfield before their game.

Both players wear No. 3 on their respective teams and led the moment of silence for Buffalo Bills safety Damar Hamlin. Wilson and James crossed arms at midfield while kneeling, and players from both teams stood on the field with their arms linked.

Los Angeles Chargers head coach Brandon Staley wears a jersey to show support for Buffalo Bills safety Damar Hamlin during the first half of an NFL football game against the Denver Broncos in Denver , on Sunday, January 8, 2023.
(AP Photo/David Zalubowski)

NFL fans at Empower Field at Mile High cheered as Wilson and James hugged and headed back to their teams.

Hamlin and his health were on everyone’s mind in the NFL on Sunday. Hamlin went into cardiac arrest during Buffalo’s game Monday night against the Cincinnati Bengals. Hamlin tackled wide receiver Tee Higgins, got up on the play, then collapsed.

He was rushed to the hospital where he was sedated in critical condition for a few days. He then woke up and positive updates on his neurological ability were given with the best update on Saturday.

Russell Wilson #3 of the Denver Broncos and Derwin James Jr. #3 of the Los Angeles Chargers pray before their game at Empower Field At Mile High on January 8, 2023 in Denver, Colorado.
(Justin Edmonds/Getty Images)

The doctors who treated Hamlin described his neurological function as «excellent.» The Bills said Hamlin continues to breathe on his own but remains in critical condition. He was removed from a ventilator on Friday and he displayed the ability to speak.

Hamlin also tweeted for the first time since the incident.

«Putting love out into the world comes back 3x…grateful for everyone who reached out and prayed. This will make me stronger on the road to recovery, keep praying for me!» wrote on Saturday.

He was also live tweeting from his bed when the Bills took on the New England Patriots.