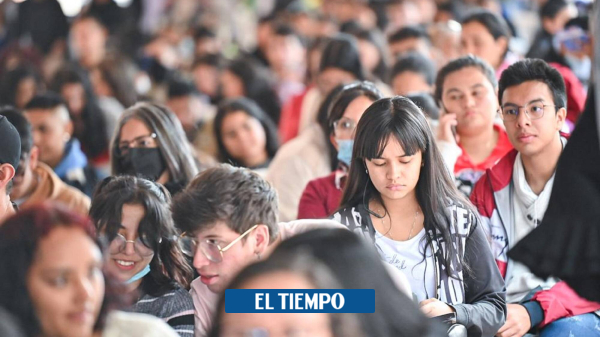 In the midst of the controversy that showed the statements of Jaime Dussán, president of Colpensiones, who said, on the eve of Christmas, that with the savings that millions of Colombians have for their pensions, social issues and infrastructure works would be financed, such as a project iron rail that would go from Buenaventura to Barranquilla, among others, the private pension funds (AFP) broke their silence and categorically rejected this type of initiative that puts that savings at risk.

Santiago Montenegro, president of Asofondos, He told EL TIEMPO, exclusively, that in no way should the resources of the youth go to cover the enormous deficit of Colpensiones, nor pay subsidies, much less finance lunatic investment projects. And he warned that Colpensiones must have an institutional scheme similar to that of the Issuer.

(You may also be interested in: Dollar: why is its value falling in Colombia and the world?)

The president of Asofondos, Santiago Montenegro.

What are the aspects that, according to Asofondos, could ensure a solid pension reform?
​
For at least 10 years, we have proposed to all governments to make a pension reform. Any reform that is made must have as its center guaranteeing pensions for all workers today and tomorrow. The need for reform is linked to the dramatic aging of the population, which is one of the most serious problems facing humanity. Every year there are fewer active contributors to social security and more older adults, who require an income to live and costly financing for their health. In Colombia, today there are 7.3 million over 60 years of age, in just 30 years there will be 17; today there are only 800,000 over 80 years of age, in 30 years there will be 3.6 million. This causes the demographic transition to turn pay-as-you-go or medium-premium pension schemes into financial pyramid schemes.

What risks does this bring?
​
This implies that they are not sustainable or are only sustainable with a progressive reduction in benefits: no pension, increasing age, raising contributions, more weeks of contributions or less pension. For these reasons, the reform that is carried out must be based on savings and capitalization, which can be managed by the private sector or by the public sector. More and more countries in the world are incorporating savings into their pension systems. The last to do so was China. And in Mexico, which already had it, the most recent reform by López Obrador substantially increased individual capitalization. In this order of ideas, the pension reform that is made should not be for the next four years, but for future generations. It must be a reform thinking of today’s youth for when they are older adults. In addition to the aging of the population, Colombia needs a reform of the old-age protection system due to the low existing coverage, because in the public system the largest subsidies go to the highest pensions, and due to the enormous deficit and pension liability that Colpensiones has .

How to achieve a pension reform that corrects the current imbalances if the Government has said that the age or the amount of the contributions will not be touched?
​
A reform must have: a solidarity pillar for poor older adults, financed not with the contributions of formal workers, but with resources from the national budget. We have argued that a special fund should be created for this purpose, fed with various sources of public revenue; a contributory pillar of individual capitalization, which can be administered by both public and private entities; a semi-contributory pillar, made up of savings that are not enough to finance a minimum wage pension and that can be added to the solidarity pillar; a pillar of voluntary savings. Naturally, the reform that is made must have a transition period and must respect the acquired rights of current retirees and the legitimate expectations of those who are close to retiring. We also propose that the legal nature of Colpensiones be transformed and isolated from the political cycle.

What does this mean?
​
Colpensiones should have an institutional scheme similar to that of Banco de la República, with a fully independent board of directors appointed for fixed terms. With these principles, the public system will begin to be sustainable because high pension subsidies will disappear, pensions will be proportional to lifetime contributions and actuarially fair. As they will be based on the savings of each affiliate, it will not be necessary to adjust both the contributions or the retirement age.

Does Colpensiones have an investment regime that allows it to manage future reserves, as the Government is proposing?
​
Today, Colpensiones is a payer of very regressive pensions, that is, they give higher subsidies to those with higher incomes, and a payer of the so-called substitute indemnities to the vast majority of affiliates who do not retire and to whom adjusted contributions are returned only with inflation (according to Colpensiones figures, 7 out of 10 people who reach the age do not retire in that entity; according to calculations by various academics and according to our estimates, 9 out of 10 do not retire in Colpensiones). Since real interest is not recognised, such returns are only one seventh of what private pension funds return. Colpensiones does not have reserves or an investment regime, which it should have in the future. Since it has no assets, its balance sheet has liabilities and a negative net worth of 39 percent of GDP, corresponding to the general pension system. If the special mechanisms are considered, said deficit rises to 103 percent of GDP. If you paid interest on your returns to those who do not retire, your current deficit would be much higher and your pension liability would be higher as well.

How to ensure that the average premium scheme can have pension reserves without this depending on the resources of private funds?
​
With the pension reform, another public pension system would have to be created, totally isolated from the current average premium system, which would have to be implemented. The resources that arrive to the new public regime will have to be saved to create the reserves that finance the pensions of the young people of today. In no way, with these resources from young people, the enormous gaps that Colpensiones has today should be covered, neither should it finance new subsidies, much less finance lunatic investment projects, such as the train between Barranquilla and Buenaventura. Be careful, we are not proposing to end Colpensiones, we are proposing to take care of the new resources that enter Colpensiones, separating them from the current average premium regime. The new resources that arrive at Colpensiones must also be saved to, at least, maintain the flow of savings in the country, which is low compared to that of other countries. If said savings are reduced, interest rates will rise and the financing and refinancing of public and private debt would become more expensive, for the ordinary citizen it becomes more difficult to buy their own home, change the car, and everything they need. It is financed with debt. A reduction in the flow of savings would also deteriorate the current account of the balance of payments, which already has a deficit close to 7 percent of GDP, and would increase the price of the dollar. For these reasons, risk rating agencies and international investment funds are very aware of what may happen with the pension reform in Colombia.

Will the resources that are expected to come out of the AFPs, with the reform, be enough to pay the pensions of Colpensiones retirees and create reserves that can later be invested in infrastructure?
​
Until now, we are not aware of a pension reform text from the Government. The only thing that has been said is that contributions over four minimum wages would go to Colpensiones and that contributions above these would go to private pension funds. If so, that money does not come from the AFPs but from the contributions of the workers. Those savings belong to the workers and for this reason, whoever manages it must be very well managed, by technically trained teams. In this way, with those savings, you will not be forced to pay pensions for Colpensiones retirees, nor subsidies for the elderly. The deficit of current retirees must continue to be paid for by the national budget, and the same should be done with other subsidies that are thought to be created, such as the 500,000 pesos for the elderly.

What to do with the subsidies for large pensions?
​
The Government and Congress have to make decisions on pension matters thinking about what is best for the majority and not about maintaining exorbitant privileges. Subsidies for large pensions are not viable and that is another reason for the new resources that arrive at Colpensiones to be saved in a new regime isolated from the accounts of the current average premium regime. We propose that in the new public system there are only subsidies for minimum wage pensions. The need for a new public scheme different from the current average premium with subsidies and with a similar pension liability is justified, among other things, because even if the current public scheme did not have such subsidies, it is not sustainable due to the demographic transition that will inevitably be turns pay-as-you-go systems into financial pyramids.

Where will the resources for the millions of older adults who will not retire and who have been promised an income of 500,000 pesos a month come from?
​
For the reasons stated, these resources must come from the national budget and never from the contributions of formal workers that reach the public system. The cost of this subsidy would be 18 billion pesos per year if it is for 3 million older adults and 36 billion if it is extended to all older adults today. All this means that a pension reform must be thought for the present and also for the next generations and should never be seen as a mechanism to give money to an administration.