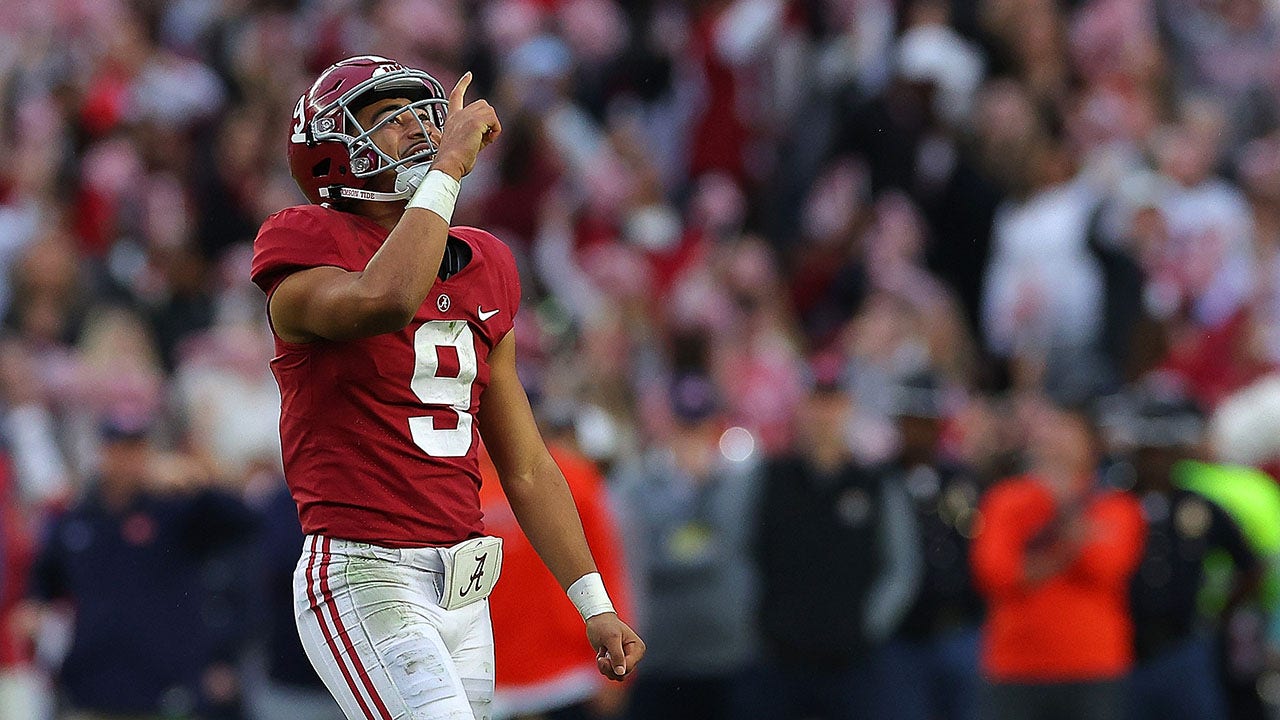 Bryce Young passed for 343 yards and three touchdowns and rushed for another score in perhaps his last home game for No. 8 Alabama, leading the Crimson Tide past Auburn 49-27 in Saturday’s Iron Bowl.

The Tigers (5-7, 2-6) were trying to secure bowl eligibility and salvage a disappointing season that included the firing of coach Bryan Harsin on Oct. 31.

Bryce Young #9 of the Alabama Crimson Tide reacts after passing a touchdown pass to Traeshon Holden #11 against the Auburn Tigers during the first half at Bryant-Denny Stadium on November 26, 2022 in Tuscaloosa, Alabama.
(Kevin C. Cox/Getty Images)

Young, a junior, completed 20 of 30 passes with one interception and rushed for 48 yards. The 2021 Heisman Trophy winner projects as a top NFL draft pick if he leaves early, as does Tide All-America linebacker Will Anderson Jr., who had a sack in the fourth quarter to help stop a late Auburn series.

Auburn rushed for 318 yards, his most against Alabama since it gained 355 in 1983. But the Tigers’ passing game was virtually nonexistent. Quarterback Robby Ashford became the first Auburn player to rush for two Iron Bowl touchdowns since Carnell Williams, now the Tigers’ interim coach, in 2003.

Ashford gained 121 rushing yards but threw for just 77, though that included a near-perfect 20-yard touchdown pass to J’aVarrious Johnson in the right corner of the end zone.

The Alabama Crimson Tide offense lines up against the Auburn Tigers defense during the first half at Bryant-Denny Stadium on November 26, 2022 in Tuscaloosa, Alabama.
(Kevin C. Cox/Getty Images)

Williams and Auburn settled for two field goals in the fourth quarter and allowed a late touchdown run by Jahmyr Gibbs.

For Auburn, the week was dominated by speculation about who athletic director John Cohen would hire to replace Harsin. The most talked about candidate, Lane Kiffin of Mississippi, said he will stay. Liberty’s Hugh Freeze said after his team’s final regular-season game on Saturday that he had not been offered the job, but he confirmed his interest.

«The part that is false is that I have not been made any offers, nor have I accepted anything,» Freeze said.

Auburn: Finished 2-2 under Williams, who had been the running backs coach. Mistakes on Saturday included a missed punt and a fumble when Hunter collided with a teammate downfield. Both set up Alabama touchdowns.

Alabama: Won easily enough, but still didn’t look like a college football playoff-caliber team, getting attacked defensively on the ground and not many big plays on offense.

Roydell Williams #5 of the Alabama Crimson Tide reacts as he runs for a score against the Auburn Tigers during the first half at Bryant-Denny Stadium on November 26, 2022 in Tuscaloosa, Alabama.
(Kevin C. Cox/Getty Images)