No. 21 Oregon State rally from a three-touchdown deficit to beat No. 9 Oregon 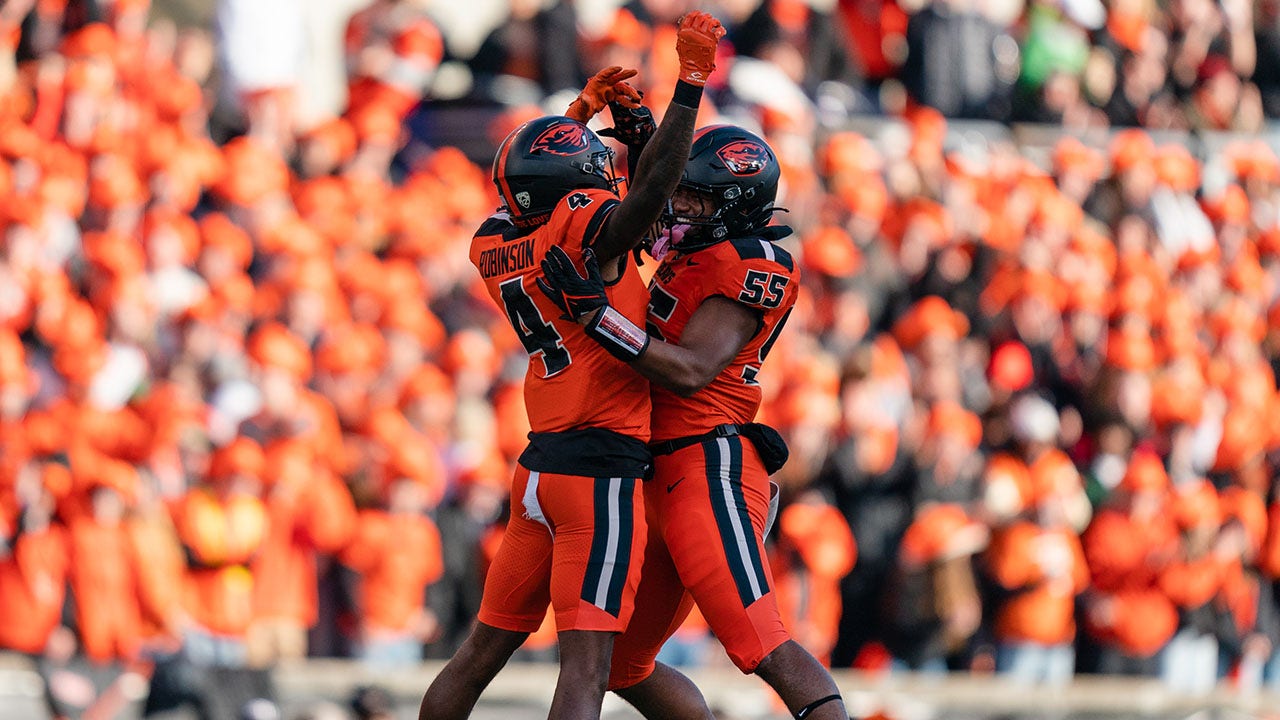 Isaiah Newell ran for the go-ahead touchdown with 8:11 remaining, and No. 22 Oregon State capitalized on critical fourth-quarter errors by No. 10 Oregon to rally 38-34 on Saturday.

Oregon State Beavers defensive back Jaden Robinson #4 and linebacker Easton Mascarenas-Arnold #55 celebrate during the first half of the game against the Oregon Ducks at Reser Stadium on November 26, 2022 in Corvallis, Oregon.
(Ali Gradischer/Getty Images)

First, Oregon allowed a 48-yard kickoff return by Silas Bolden, and a facemask penalty set up Oregon State at the Ducks 36-yard line. Newell ran for a 15-yard touchdown run to make it 34-24.

Then Oregon punter Alex Bales fumbled the snap and fell on the ball at his own 2-yard line. Two plays later, Ben Gulbranson connected from 1 yards out to pull Oregon State within 34-31.

Oregon then went for it on 4th-and-1 at their own 29, and QB Bo Nix was stopped for a 1-yard loss on the Ducks’ only called QB run of the game. Newell scored four plays later, with a convoy of blockers helping push him into the end zone from 6 yards out.

Oregon State Beavers defensive back Jaydon Grant #3 makes a tackle during the first half of the game against the Oregon Ducks at Reser Stadium on November 26, 2022 in Corvallis, Oregon.
(Ali Gradischer/Getty Images)

The Ducks can still make it to the Pac-12 championship game, but they needed Washington State to beat rival Washington later on Saturday. If Washington wins, No. 14 Utah would advance to the title game against No. 5 Southern California.

Oregon State rushed for 268 yards and five touchdowns, overcoming their lack of passing game. Damien Martinez led the way with 103 yards on 15 carries. Ben Gulbanson was just 6 of 13 for 60 yards with two interceptions, but ran for two scores. Newell scored on his only two carries of the game.

Oregon State Beavers quarterback Ben Gulbranson #17 prepares to throw the ball during the first half of the game against the Oregon Ducks at Reser Stadium on November 26, 2022 in Corvallis, Oregon.
(Ali Gradischer/Getty Images)

Nix passed for 327 yards and two touchdowns and Oregon finished with 470 total yards, but Nix’s inability to rush was a big factor.