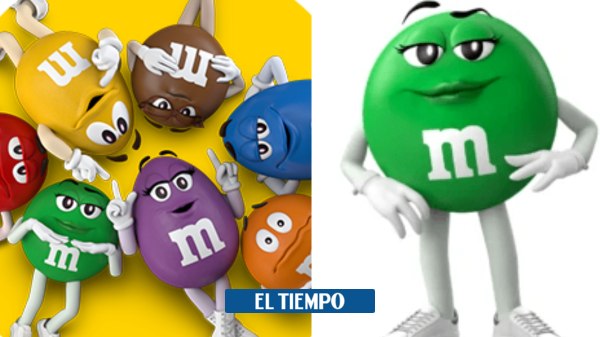 When we think of M&M, the multicolored button-shaped chocolates, it is inevitable not to refer to its incomparable sweet taste, the sensory experience it provides, its versatile packaging and, of course, the iconic characters that, for years, have been the image of this traditional American product.

Red, yellow, green, brown, blue and even orange, the M&M characters, personified in sweets, seem to have their own style. Each, in their own way, comes to life, expresses themselves and shines through diversity. However, it was precisely this change in the style of the colorful characters that led the company to make a radical decision: retire them indefinitely.

The announcement was made known on January 23 through a statement released on social networks: “We have decided to put voice candy on indefinite hiatus.” Instead, the iconic chocolates will be made successful by actress Maya Rudolph, whose mission as spokesperson will be to «champion the power of fun to create a world where everyone feels they belong.»

(Also read: Ecopetrol: how many resources will the oil company leave the Nation in 2023?).

Rudolph is an American actress, comedian, and singer. Humor and fun have been pillars in her artistic career: between 2000 and 2007 she was part of the comedy show ‘Saturday Night Live’ and has also participated in films such as ‘Away we go’, ‘Bridesmaids’ and ‘Grown ups’. ‘.

Criticism, the cause of goodbye to colorful candies

The beginning of the end of the colorful M&M candies began in January 2022, when the chocolate-shaped characters underwent an image change that, far from contributing to the construction of an inclusive society -which was the main purpose- , what it did was generate a series of criticisms and negative comments.

The biggest change, and perhaps one of the most controversial, was that of Green -the green candy-, who was stripped of his characteristic boots go go white to put on some sports shoes “relaxed and cool” who aim to reflect their effortless confidence.

The right has reached the pinnacle of satirizing itself. I can’t believe that Tucker Carlson, angered by the appeal of the Green M&M, isn’t a piece of the 2012 Colbert Report that reads verbatim. pic.twitter.com/EiEftthg8O

Although this change was one of the most notorious, it was not the only one: Brown, the brand’s other female gender candy, was not spared from starring in a shoe transformation either. From wearing high stiletto heels they went on to have lower and more comfortable ones. Orange’s shoes -the orange candy-, for their part, were no longer untied, as they probably were.

Both the green and brown caramel had changes in their style.

Mars, the candy company that owns the product, decided to go for a «fresh and modern» interpretation of the traditional look of the characters. The goal was to give them «more nuanced personalities to underscore the importance of self-expression and the power of community through storytelling,» according to the ‘Today’ show; however, what happened was the opposite.

Social networks were filled with criticism, mainly, towards the change that the green character underwent, while they claimed that the sneakers as his new pose -with his hands on his «waist»- turned off all traces of sensuality that, no matter how much time, characterized it.

According to the television program ‘DW’, a campaign has emerged to restore the sensuality of green candy; the initiative added 20 thousand signatures. Efforts to discredit the change of image were added to a column in ‘Rolling Stone’ magazine that spoke out against the brand’s action, asking that they let the character be.

The purple M&M was released to represent inclusion and acceptance.

As if the image transformations had been enough, the brand will include a new character after more than a decade: the purple candy will be discovered -third female spokesperson, after Green and Brown-, who represented inclusion and acceptance.

(Of interest: The agony of Coltejer: history of the crisis of the emblematic company).

With the advent of purple candy, M&M was charged with seeking public approval, sAbove all, because its color was associated with the feminist movement and the LGBTIQ community. In other words, the change brought with it a shower of questions for supposedly politicizing the famous sweets.

“If this is what you need to validate yourself, an M&M in the color you think is associated with feminism, then I’m worried about you.«, said the presenter Martha MacCallum in a live program, according to ‘CNN’, who joined the rain of criticism that the brand was receiving.

Faced with criticism, the company made a radical decision: temporarily retire the characters from their role as spokespersons.

“We weren’t sure anyone would notice (the makeover). And we definitely didn’t think this was going to break the internet, but now we get it: even candy shoes can be polarizing, which is the last thing M&M wanted, because bringing people together is what matters most to us.» the brand in the statement.

In 5 years, Promigás will halve its greenhouse gas emissions

Innovation, Kimberly’s bet in its 150 years

SAS companies, what they are, how they are created and their benefits

Coworking: what are the advantages and disadvantages of shared space?

Soat: this is how the sale of this insurance is going one month after the aid is issued – Financial Sector – Economy