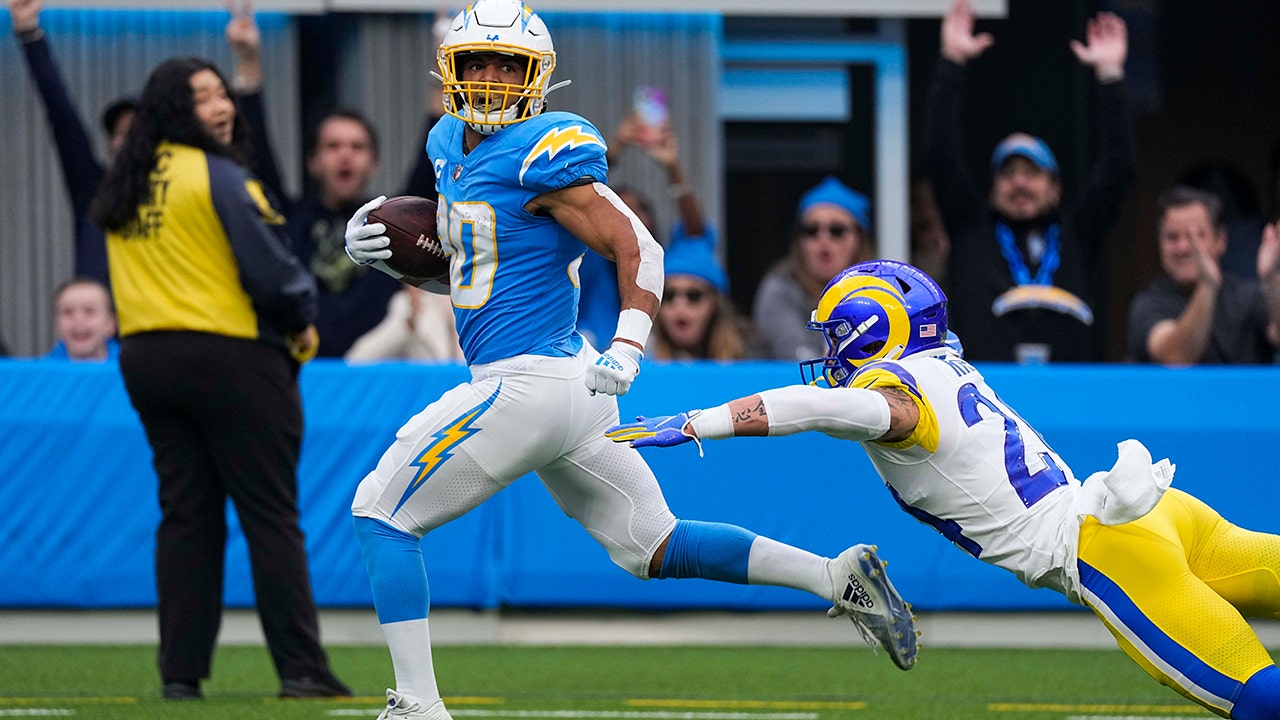 Austin Ekeler rushed for 122 yards, scored two touchdowns and became the fifth running back with 100 receptions in a season as the Los Angeles Chargers posted a 31-10 victory over the Los Angeles Rams on Sunday in a matchup of co-tenants at SoFi Stadium.

Leading the NFL with 18 touchdowns (13 rushing, five receiving), Ekeler also had a best 72-yard touchdown run midway through the second quarter to extend the Chargers’ lead to 14-3.

Los Angeles Rams running back Malcolm Brown (41) jumps in the end zone as he celebrates his touchdown during the first half of an NFL football game against the Los Angeles Chargers on Sunday, January 1, 2023 in Inglewood, California.
(AP Photo/Marcio José Sánchez)

It was the third 100-yard rushing game in Ekeler’s six-year career and his second this season. He had a career-high 173 yards in a win Oct. 10 at Cleveland.

Justin Herbert passed for 212 yards and two touchdowns as the playoff-bound Chargers won their fourth straight win to improve to 10-6. Mike Williams had seven receptions for 94 yards, including an 18-yard one-handed toe catch along the left sideline late in the second quarter.

It was the Rams’ 11th loss of the season, surpassing the 1999 Denver Broncos for the most losses by a defending Super Bowl champion.

Los Angeles Chargers running back Austin Ekeler (30) evades a tackle by Los Angeles Rams safety Taylor Rapp as he runs into the end zone for a score during the first half of a Los Angeles Rams football game. the NFL on Sunday, January 1, 2023, in Inglewood, California.
(AP Photo/Mark J. Terrill)

Ekeler scored on back-to-back possessions in the second quarter to give the Chargers a 14-3 lead. After having a 10-yard run against left guard to give the Bolts a 7-3 lead, Ekeler patiently waited for a seam to develop on the right side of the line before driving 72 yards.

Ekeler became the fifth running back in NFL history to have a 100-reception season with his first catch, an 8-yard pass from Herbert on the Chargers’ opening possession.

Ekeler joins former Chargers great LaDainian Tomlinson, Arizona’s Larry Centers, Chicago’s Matt Forte and Christian McCaffrey as the only other players to accomplish the feat. McCaffrey is the only running back with two 100-reception seasons.

PROGRESS IN THE THIRD QUARTER

Los Angeles Chargers quarterback Justin Herbert (10) attempts to throw a pass during the first half of an NFL football game against the Los Angeles Rams on Sunday, Jan. 1, 2023, in Inglewood, California.
(AP Photo/Marcio José Sánchez)

The Chargers found the end zone in the third quarter for the first time in 11 games when Herbert connected with Gerald Everett for an 8-yard touchdown run to cap an 11-play, 75-yard drive to open the second half.

Herbert, who completed 21 of 28 passes, entered the game without a TD pass in two straight games for the first time in his three-year pro career.

BRAND OF THE CENTURY

Herbert’s 3-yard TD pass to Donald Parham early in the fourth quarter gave Herbert a combined 100 rushing and passing touchdowns. That ties him more to Dan Marino over the first three seasons of a career.

Rams: DB Nick Scott suffered a shoulder injury in the third quarter, but returned midway through the quarter.

Rams: They conclude their season in Seattle next Sunday.

Chargers: They finish the regular season in Denver next Sunday.