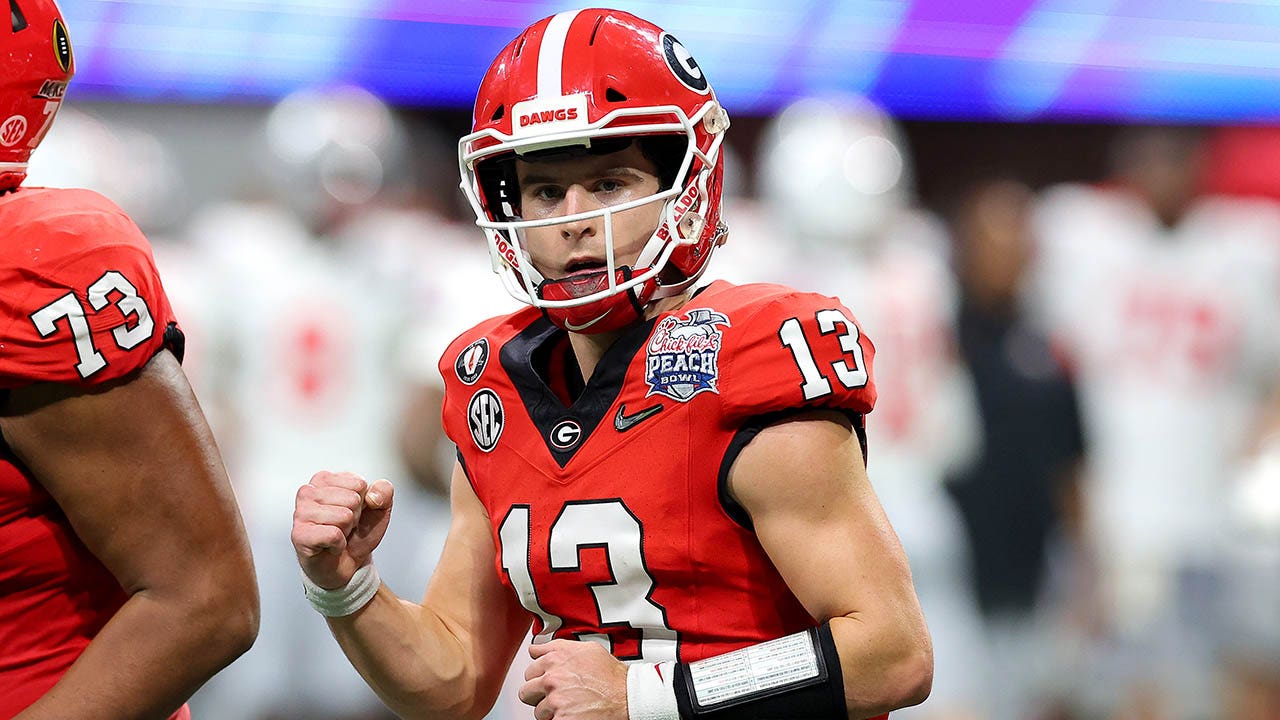 The National Championship for January 9 is set.

Earlier in the day, No. 3 TCU upset No. 2 Michigan, who also entered the day undefeated, in the biggest upset in CFP history.

Georgia was the favorite to win, but for a long time that didn’t seem to be the case.

Stetson Bennett #13 of the Georgia Bulldogs reacts after a touchdown during the first half against the Ohio State Buckeyes at the Chick-fil-A Peach Bowl at Mercedes-Benz Stadium on December 31, 2022 in Atlanta, Georgia.
(Kevin C. Cox/Getty Images)

Georgia was down 14 early in the fourth quarter, but they kicked an early field goal to put up an 11-point deficit. After forcing a 3-and-out, Stetson Bennett found Arian Smith on the first play of their ensuing drive for a 76-yard drive. They went for two and got it, making it a 38-35 game with 8:41 to go. The Buckeyes had to settle for a field goal with 2:43 to go, giving Georgia’s offense one more chance. Well, they were in the red zone in about a minute. On 2 and 5 from the Buckeye 10, Stetson found Adonai Mitchell for the 10-yard touchdown, and the ensuing field goal gave Georgia a 42-41 lead with 54 seconds remaining.

CJ Stroud had less than a minute to send the Buckeyes to the National Championship after Georgia overcame a 14-point deficit to take a one-point lead: they were within field goal range in about 30 seconds. Noah Ruggles entered for a 50-yard field goal with eight seconds remaining, but missed wide left, giving Georgia the win.

Ohio State took a 21-7 lead when it picked off Bennett after scoring a touchdown and turning that into another seven points (who more than Marvin Harrison Jr. to score twice in the first half). But after Kendall Minton got the Bulldogs back to a touchdown, they forced a three-and-out, and Bennett ran in one to tie the game. The Bulldogs added a field goal with 1:44 left in the half, but Stroud threw for 75 yards in just four plays in less than a minute to take a 28-24 lead into the locker room.

Georgia got the ball to start the second half, but it went three-and-out, and OSU took advantage, as Stroud found Emeka Egbuka for a 10-yard touchdown run to go up 11. Both teams traded punts, but Kearis Jackson returned the Buckeyes. punt to field goal range. However, Jack Podlesny missed the field goal, and Ohio State made another drive into the end zone. However, on third-and-goal, Stroud was looking for Harrison again, but he took a big hit and the coaches had to tend to him. After a brief stoppage, the Buckeyes made the field goal to go up 38-24 and Harrison never returned to the game.

And then, well, the rest is history.

Stetson Bennett #13 of the Georgia Bulldogs reacts after a field goal during the first half against the Ohio State Buckeyes at the Chick-fil-A Peach Bowl at Mercedes-Benz Stadium on December 31, 2022 in Atlanta, Georgia.
(Kevin C. Cox/Getty Images)

The Bulldogs outscored OSU 18-3 in the fourth quarter to recapture the victory.

Bennett completed 23 of his 34 passes for 398 yards and three touchdowns, while 10 Bulldog receivers had at least one catch.

Stroud passed for 348 yards on 23-of-34 passes, while Egbuka and Harrison combined for 218 receiving yards on 13 catches.

Kendall Milton #2 of the Georgia Bulldogs celebrates after a touchdown during the second quarter against the Ohio State Buckeyes at the Chick-fil-A Peach Bowl at Mercedes-Benz Stadium on December 31, 2022 in Atlanta, Georgia.
(Carmen Mandato/Getty Images)

Georgia and TCU will meet at SoFi Stadium in Southern California.